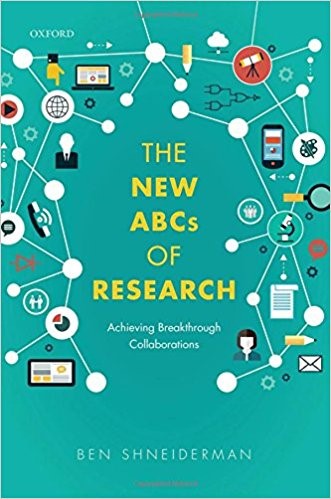 Ben Shneiderman is a Distinguished University Professor in the Department of Computer Science, founding director of the Human-Computer Interaction Laboratory, and a member of the Institute for Advanced Computer Studies at the University of Maryland, College Park. He was elected as a Fellow of the Association for Computing (ACM) in 1997 and a Fellow of the American Association for the Advancement of Science (AAAS) in 2001. He received the ACM SIGCHI Lifetime Achievement Award in 2001 and is a member of the National Academy of Engineering.

Dr. Shneiderman has many publications related to computer science, informatics and policy. Most recently, in February 2016, Dr. Schneiderman published The New ABCs of Research: Achieving Breakthrough Collaborations, “a book that recognizes the unbounded nature of human creativity, the multiplicative power of teamwork, and the catalytic effects of innovation.” This book is meant to serve as a guide to students and a manifesto for policy makers, challenging widely-held beliefs about how applied innovations evolve and how basic breakthroughs are made. Recently, Dr. Shneiderman published a booklet titled, Every Algorithm has Art in It, that contains his visualizations displayed at the National Academy for Sciences. This booklet was designed by one of Optimal’s business analysts, Minhaz Kazi.

On Thursday, May 19, 2016, Dr. Shneiderman will host a brown bag presentation at Optimal to discuss his new book: The New ABCs of Research: Achieving Breakthrough Collaborations.