The U.S. Department of Health and Human Services and the Centers for Medicare & Medicaid Services (CMS) observed Medicare’s 50th anniversary in July of 2015. President Lyndon B. Johnson signed the insurance program for retired persons into the Social Security Act on July 30, 1965. Since then, Medicare has included benefits for speech, physical, and chiropractic therapy; benefits for younger people who have permanent disabilities, end-stage renal disease, or suffer from amyotrophic lateral sclerosis; hospice care; and most recently, prescription drugs.

In Medicare’s first year, 19 million people were covered. Today, more than 55 million people are covered. Medicare has been credited with the decline in the elderly poverty rate and the creation of thousands of jobs. Medicare has benefited from the Affordable Care Act because beneficiaries don’t have to pay out-of-pocket for preventative screenings, annual wellness visits, or personalized preventative plans. It is estimated that by the time the last of the Baby Boomers reach 65, close to 80 million people will be covered by Medicare. While Medicare’s growth has been a relied upon benefit for millions who need it, it also focuses on delivering cost-effective quality healthcare.

Congress created CMMI under the Affordable Care Act and charged it with developing, testing, and implementing new health care models that improve health care delivery, provide improved health status for CMS beneficiaries, and lower costs. LDG (within the CMMI), is responsible for assisting model teams with developing robust learning systems built on a foundation of improvement science. In an effort to optimize the models’ outcomes, these learning systems are designed to share lessons learned and best practices in terms of model implementation and administration. Each model has a learning system designed to address the unique needs of that model.

As part of developing standard operating procedures for real-time data collection and reporting, Optimal is developing the LSDM Data Management, Analysis and Reporting System (DMARS) using its proprietary customizable software, Revelo™. The online database application will be hosted in a CMS environment and is currently making its way through the CMS approval process based on the Federal Information Security Management Act and the National Institute of Standards and Technology requirements and standards. In the interim, Optimal has implemented a secure manual data collection protocol Optimal provides training and technical assistance to stakeholders. It also maintains the LSDM community on the CMS Connect tool, and a collaboration site.

In an effort to underscore the importance of healthy living and staying active, Optimal Solutions Group, LLC (Optimal) encourages its employees to keep moving and provides opportunities for staff to expand their knowledge outside their subject matter. Earlier this year, Optimal held a WalkFit contest, for which groups of staff members “walked” to San Salvador, El Salvador. END_OF_DOCUMENT_TOKEN_TO_BE_REPLACED

The Benefits of Nutrition Investments for Older Adult Health 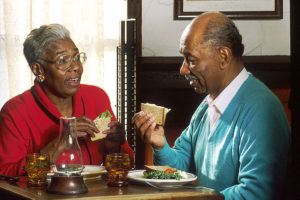 Research suggest that more than half of community-dwelling older adults in America are at risk of malnutrition as a result of poor health outcomes. Erika Rogan, a PhD candidate in Health Policy and Management at Yale University, spoke with Optimal staffers to provide a deeper look into the relationship between nutrition investments and health outcomes. END_OF_DOCUMENT_TOKEN_TO_BE_REPLACED